Here it is, done at last! Give it a try!
Link to Google Play
9 comments:
Labels: glass 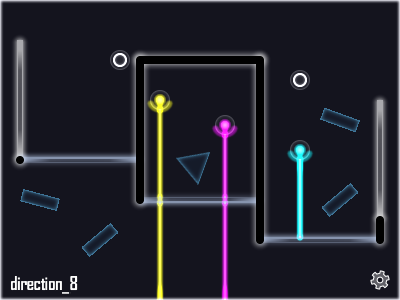 As of this moment, I have only a dozen levels left to make. After that, I just need to do some fiddling with different screen resolutions, make some pretty screenshots for the Google Play listing, and then Glass will be ready for release!

Here's a screenshot of a new puzzle element: filters that only let lasers of certain colors through. 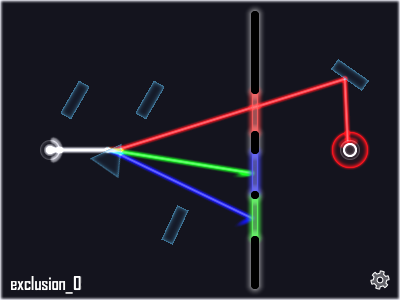 I posted on /r/gamedev's Screenshot Saturday thread again, you can see it here!
No comments:
Labels: glass

Two and a half months ago, I set a goal to finish Glass before the end of October, and then proceeded to fail. Finishing up turned out to be more time consuming than I anticipated, and trying to do it while also dealing with midterms was rather stressful. After October ended, I decided to give myself two more weeks, then failed to meet that goal as well, and pretty much stopped working on Glass altogether.

I did, however, manage to complete 27 out of 81 planned levels for the beta test. Ten folks have installed, although I don't actually know how many have completed past the first set of 9 levels.

Three things I learned from this experience:
1. Don't pull something like this during exams. It was too stressful, I burned out, and had no motivation after.
2. Making each individual puzzle takes a long time. It's not trivial at all.
3. Git is so very convenient, much better than uploading a zip file with everything in it to Google Drives every time something changes.

Winter break begins next week, and will last for four more weeks. Let's hope that I can accomplish something during that time.
1 comment:
Labels: glass

I decided at the start of this month that I would attempt to complete the October Challenge and finish Glass. It's been a lousy few weeks trying to finishing everything up for Glass and deal with midterms at the same time, but Glass is now ready for beta testing. The last twelve hours have been spent finishing the tutorial, completing the level editor, making the first set of levels for the game, and putting it up on Google Play. Turns out that it takes a few hours for the app to be processed, so it'll be awhile before I know for sure that it's online.

For a sneak peak of gameplay, here's a gif that I posted on Reddit gamedev's Screenshot Saturday thread last last Saturday.

Since it's in private beta, only folks who have been invited will be able to download it, so anyone interested can just send me a message.

As a bonus, here is a screenshot of what happens when you pave the entire screen with convex lenses. 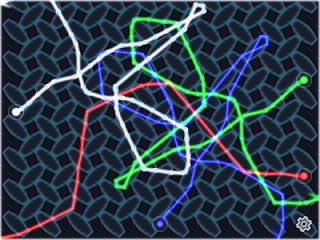 Also, I have a Facebook page.
No comments:
Labels: glass

Fun fact: the code for Glass is currently 388,903 bytes long. One character of ASCII text takes up one byte, which means 388,903 characters of code. Brave New World, according to Amazon's book stats, is 380,626 characters long. Glass is now longer than Brave New World.

The game is nearly done. I'm finished with most of the user interface, am done adding new gameplay features, and made a half-baked soundtrack for the title screen over the last two months. Sound effects are in the works. In terms of code and asset development, I expect to be finished in less than a month. It's a generous deadline, but I'm pretty terrible with deadlines. All that's left after that is to crank out eighty different levels.

In any case, this means that it's almost time to start beta-testing the game. In other words, for the next few months, I am going to have to start bugging everybody I know that owns an Android device to play and give me feedback. It's kind of scary to start opening up this project of mine to be criticized, but it's got to be done.

I'm also thinking of maybe making an actual website now, instead of just a blog, but that's a lot more work, plus money for a domain name and hosting.
No comments:
Labels: glass

Procrastination is a disgusting brain parasite, and sadly, I have acquired it. 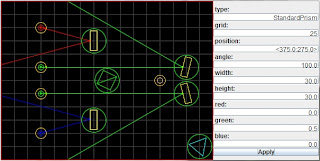 In what little time I've actually spent on this project in the last few weeks, I've started putting together a graphical level builder. Before, I had been making levels by editing each levels' data in Notepad, which, as you might imagine, is somewhat inefficient. Java's swing package, which contains several GUI components and basic drawing functions, makes putting together something like this much easier than in libgdx, since I don't have to write my own buttons or deal with textures. It's kind of ugly, but very convenient. 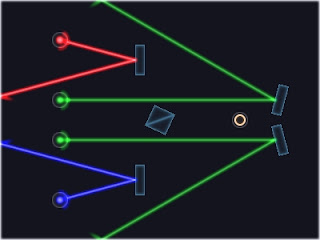 In an ideal world, everybody would know the RGB color wheel and would be able to discern what proportion of red, green, and blue any color is made up of just by looking at it. Sadly, this is not how reality works, which forces me to devise some way of telling players what each target color is composed of. Currently, players touch each target to bring up a diagram that will tell them the exact composition of the target color. I've gone through several iterations of how this diagram should look/work, before settling on this one. All of the other ones either looked terrible, were too confusing, or both.

Each ring corresponds to either red, green, or blue, and the fraction that is lit represents how much of that color channel is required.

I'd like to have the user interface completely done before the end of next week, so let's hope that I can squish the procrastination wormthing.